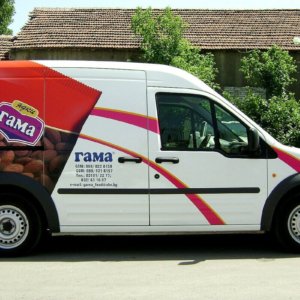 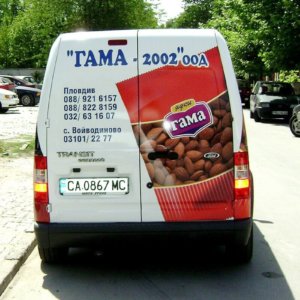 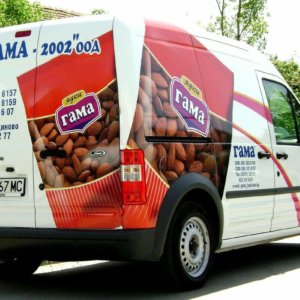 GAMA 2002 is a producer of cereal snacks and muesli, chocolate nuts and dragees. Their brand Gama Food trades in Bulgaria and abroad. In one of our projects back in 2008, we wrapped one of the company’s cars with beautiful graphics.

For Gama’s wrapped car, we used high-quality 3M film. The advertising graphics (lines and text) are made from the series of 3M Scotchcal cutting film, and the snack pack is made out of digital printing film. The advertising vision and the choice of the film are tailored to the appearance of the vehicle (Ford Transit). The Gama  Food advertising is located on the hood and both sides of the car so that it can be seen well on all sides. The 3M film used perfectly covers the curves of the vehicle. Our trained film applicators have extensive experience in wrapping and this further guarantees the perfect appearance of wrapped cars. Gama Food car is also covered by 3M ™ MCS ™ Warranty.

Full branding of the Eurocatena bus